You're Mom: A Little Book for Mothers (And the People Who Love Them) 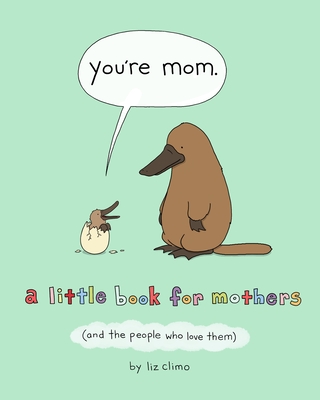 You're Mom: A Little Book for Mothers (And the People Who Love Them)

From international bestselling author Liz Climo comes You're Mom, a hilarious and relatable collection of original comics about motherhood

Moms: they are there for us through the good, the bad, the scary, the sticky, and everything in between. They also read us a lot of picture books along the way, and now there’s a picture book just for them.

Liz Climo brings her trademark wit and adorable drawings to You're Mom: a funny, honest, and sweet homage to motherhood. Detailing the ups and downs of mothering, along with the many paths to becoming a mom and the different types of motherhood, Climo pairs humorous observations with clever illustrations of baby animals and their mothers.

With more than 100 beautiful drawings, You're Mom is a book for the new mom, the seasoned mom, anyone in a mom-like role, or anyone who has ever loved a mom. It’s a thank you to those taking on the challenging role of parenting - and it's also short and sweet, which means you can read it and then hopefully get some sleep!

Liz Climo is a cartoonist, children’s book author, illustrator, and animator. She grew up in the San Francisco Bay Area and moved to Los Angeles after college to work as a character artist on The Simpsons. She is the author of the Rory the Dinosaur series, The Little World of Liz Climo, Lobster Is the Best Medicine, Please Don't Eat Me!, and Best Bear Ever!. Her books have been translated into ten languages and have sold millions of copies worldwide. She lives in Los Angeles with her husband and daughter.