The War of Return: How Western Indulgence of the Palestinian Dream Has Obstructed the Path to Peace 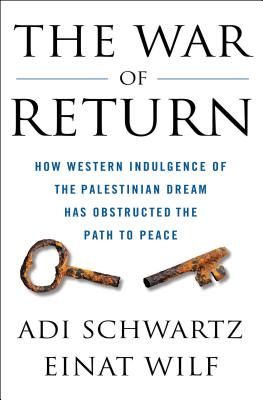 The War of Return: How Western Indulgence of the Palestinian Dream Has Obstructed the Path to Peace

Two prominent Israeli liberals argue that for the conflict between Israel and the Palestinians to end with peace, Palestinians must come to terms with the fact that there will be no "right of return."

In 1948, seven hundred thousand Palestinians were forced out of their homes by the first Arab-Israeli War. More than seventy years later, most of their houses are long gone, but millions of their descendants are still registered as refugees, with many living in refugee camps. This group—unlike countless others that were displaced in the aftermath of World War II and other conflicts—has remained unsettled, demanding to settle in the state of Israel. Their belief in a "right of return" is one of the largest obstacles to successful diplomacy and lasting peace in the region.

In The War of Return, Adi Schwartz and Einat Wilf—both liberal Israelis supportive of a two-state solution—reveal the origins of the idea of a right of return, and explain how UNRWA - the very agency charged with finding a solution for the refugees - gave in to Palestinian, Arab and international political pressure to create a permanent “refugee” problem. They argue that this Palestinian demand for a “right of return” has no legal or moral basis and make an impassioned plea for the US, the UN, and the EU to recognize this fact, for the good of Israelis and Palestinians alike.

A runaway bestseller in Israel, the first English translation of The War of Return is certain to spark lively debate throughout America and abroad.

ADI SCHWARTZ is an Israeli researcher and author. His work focuses on the Arab-Israeli conflict and Israeli history and current affairs.

EINAT WILF is a former Israeli politician who served as a member of Knesset for Independence and the Labor Party. She is one of Israel's leading public intellectuals.