Aftershocks: Pandemic Politics and the End of the Old International Order 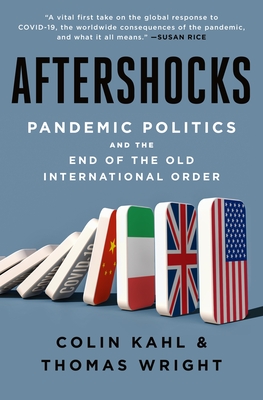 Aftershocks: Pandemic Politics and the End of the Old International Order

Two of America's leading national security experts offer a definitive account of the global impact of COVID-19 and the political shock waves it will have on the United States and the world order in the 21st Century.

“Informed by history, reporting, and a truly global perspective, this is an indispensable first draft of history and blueprint for how we can move forward.”
—Ben Rhodes

The COVID-19 pandemic killed millions, infected hundreds of millions, and laid bare the deep vulnerabilities and inequalities of our interconnected world. The accompanying economic crash was the worst since the Great Depression, with the International Monetary Fund estimating that it will cost over $22 trillion in global wealth over the next few years. Over two decades of progress in reducing extreme poverty was erased, just in the space of a few months. Already fragile states in every corner of the globe were further hollowed out. The brewing clash between the United States and China boiled over and the worldwide contest between democracy and authoritarianism deepened. It was a truly global crisis necessitating a collective response—and yet international cooperation almost entirely broke down, with key world leaders hardly on speaking terms.

Colin Kahl and Thomas Wright's Aftershocks offers a riveting and comprehensive account of one of the strangest and most consequential years on record. Drawing on interviews with officials from around the world and extensive research, the authors tell the story of how nationalism and major power rivalries constrained the response to the worst pandemic in a century. They demonstrate the myriad ways in which the crisis exposed the limits of the old international order and how the reverberations from COVID-19 will be felt for years to come.

Colin Kahl was Vice President Joe Biden’s national security advisor from 2013-2017 and deputy assistant secretary of defense for the Middle East from 2009-13. He is currently Co-Director of the Center for International Security and Cooperation at Stanford University, Steven C. Házy Senior Fellow, and professor of political science (by courtesy) at Stanford University. He has published numerous articles in The Atlantic, Foreign Affairs, Foreign Policy, The New York Times, Politico, The Washington Post, and other popular outlets, and he is a frequent contributor to CNN and MSNBC.

Thomas Wright is a senior fellow at the Brookings Institution and a contributing writer at The Atlantic. Tom has written several definitive pieces analyzing Donald Trump’s foreign policy, mixing research into the historical record of Trump’s remarks over three decades with reporting from contacts inside and near the administration. He is also author of the book All Measures Short of War: The Contest for the 21st Century and the Future of American Power (Yale University Press 2017).