Lyndon Johnson and the American Dream: The Most Revealing Portrait of a President and Presidential Power Ever Written 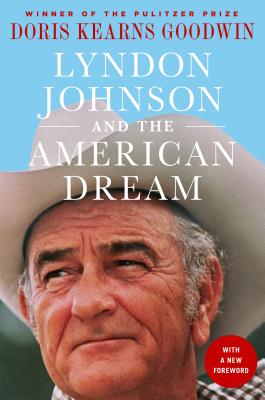 Lyndon Johnson and the American Dream: The Most Revealing Portrait of a President and Presidential Power Ever Written

By  Doris Kearns Goodwin
Paperback
$ 22.99
Out of Stock In Store (Click to Order)

Hailed by the New York Times as “the most penetrating, fascinating political biography I have ever read,” Doris Kearns Goodwin’s extraordinary and insightful book draws from meticulous research in addition to the author’s time spent working at the White House from 1967 to 1969.

After Lyndon Johnson’s term ended, Goodwin remained his confidante and assisted in the preparation of his memoir. In Lyndon Johnson and the American Dream, she traces the 36th president’s life from childhood to his early days in politics, and from his leadership of the Senate to his presidency, analyzing his dramatic years in the White House, including both his historic domestic triumphs and his failures in Vietnam.

Drawn from personal anecdotes and candid conversations with Johnson, Goodwin paints a rich and complicated portrait of one of our nation’s most compelling politicians.

Doris Kearns Goodwin is a celebrated historian and the Pulitzer Prize-winning author of No Ordinary Time: Franklin and Eleanor Roosevelt: The Home Front in World War II, the runaway bestseller Team of Rivals: The Political Genius of Abraham Lincoln, which was the inspiration for Steven Spielberg’s award-winning film Lincoln, and five other critically acclaimed and bestselling books. She lives in Concord, Massachusetts.