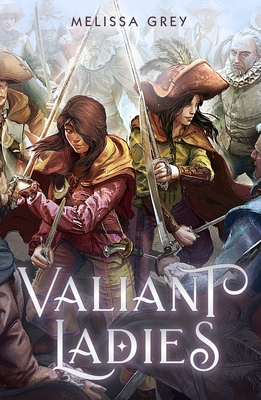 By day Eustaquia “Kiki” de Sonza and Ana Lezama de Urinza are proper young seventeenth century ladies. But when night falls, they trade in their silks and lace for swords and muskets, venturing out into the vibrant, bustling, crime-ridden streets of Potosí in the Spanish Empire's Viceroyalty of Peru. They pass their time fighting, gambling, and falling desperately in love with one another.

Then, on the night Kiki's engagement to the Viceroy's son is announced, her older brother—heir to her family’s fortune—is murdered. The girls immediately embark on a whirlwind investigation that takes them from the lowliest brothels of Potosí to the highest echelons of the Spanish aristocracy.

Praise for Valiant Ladies:
“Ana and Kiki are the sword lesbians of my dreams. This is the queer Latina historical fantasy you didn't know you wanted until you got it—and then you'll want more.” —Sam Maggs, author of The Unstoppable Wasp: Built on Hope

"Grey’s actionpacked love story offers a fresher, more nuanced take on The Three Musketeers, with a fastpaced plot and well-developed characters... Kiki and Ana are not the traditional demure ladies that swoon at the slightest provocation of violence; rather, they are the vigilante heroines that every patriarchy needs." -- Booklist, starred review

“Valiant Ladies brings the remarkable lives of two forgotten women to vivid, riotous life. Delightfully ahistorical, terribly romantic (have you ever shipped sword lesbians harder??), and all steeped in vigilante justice hell-bent on taking down a violent patriarchy—there’s only one word for it: badass.” —Mackenzi Lee, author of the New York Times–bestselling The Gentleman’s Guide to Vice and Virtue

Melissa Grey was born and raised in New York City. She wrote her first short story at the age of twelve and hasn’t stopped writing since. She is the author of The Girl at Midnight trilogy, Valiant Ladies, and Rated. When she’s not penning novels, she’s designing video game narratives. She currently lives and works in Iceland.