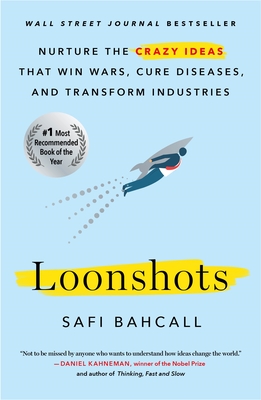 By  Safi Bahcall
Paperback
$ 17.99
Likely On Our Shelves

Loonshots reveals a surprising new way of thinking about the mysteries of group behavior that challenges everything we thought we knew about nurturing radical breakthroughs.

Safi Bahcall, a physicist and entrepreneur, shows why teams, companies, or any group with a mission will suddenly change from embracing new ideas to rejecting them, just as flowing water will suddenly change into brittle ice. Mountains of print have been written about culture. Loonshots identifies the small shifts in structure that control this transition, the same way that temperature controls the change from water to ice.

Using examples that range from the spread of fires in forests to the hunt for terrorists online, and stories of thieves and geniuses and kings, Bahcall shows how a new kind of science can help us become the initiators, rather than the victims, of innovative surprise.

Over the past decade, researchers have been applying the tools and techniques of this new science—the science of phase transitions—to understand how birds flock, fish swim, brains work, people vote, diseases erupt, and ecosystems collapse. Loonshots is the first to apply this science to the spread of breakthrough ideas. Bahcall distills these insights into practical lessons creatives, entrepreneurs, and visionaries can use to change our world.

Along the way, readers will learn how chickens saved millions of lives, what James Bond and Lipitor have in common, what the movie The Imitation Game got wrong about World War II, and what really killed Pan Am, Polaroid, and the Qing Dynasty.

“If The Da Vinci Code and Freakonomics had a child together, it would be called Loonshots.” —Senator Bob Kerrey

Safi is the author of Loonshots: How to Nurture the Crazy Ideas That Win Wars, Cure Diseases, and Transform Industries.