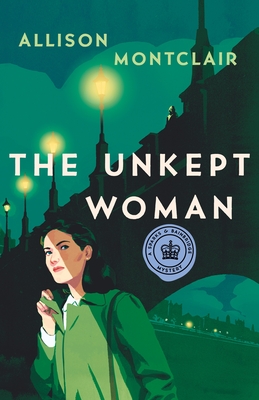 Allison Montclair returns with the fourth Sparks & Bainbridge mystery, The Unkept Woman: London, 1946, Miss Iris Sparks--currently co-proprietor of the Right Sort Marriage Bureau--has to deal with aspects of her past exploits during the recent war that have come back around to haunt her.

The Right Sort Marriage Bureau was founded in 1946 by two disparate individuals - Mrs. Gwendolyn Bainbridge (whose husband was killed in the recent World War) and Miss Iris Sparks who worked as an intelligence agent during the recent conflict, though this is not discussed. While the agency flourishes in the post-war climate, both founders have to deal with some of the fallout that conflict created in their personal lives. Miss Sparks finds herself followed, then approached, by a young woman who has a very personal connection to a former paramour of Sparks. But something is amiss and it seems that Iris's past may well cause something far more deadly than mere disruption in her personal life. Meanwhile, Gwendolyn is struggling to regain full legal control of her life, her finances, and her son - a legal path strewn with traps and pitfalls.

Together these indomitable two are determined and capable and not just of making the perfect marriage match.

ALLISON MONTCLAIR grew up devouring hand-me-down Agatha Christie paperbacks and James Bond movies. As a result of this deplorable upbringing, Montclair became addicted to tales of crime, intrigue, and espionage. She now spends her spare time poking through the corners, nooks, and crannies of history, searching for the odd mysterious bits and transforming them into novels of her own. She is the author of the Sparks & Bainbridge historical mystery series, which begins with The Right Sort of Man.