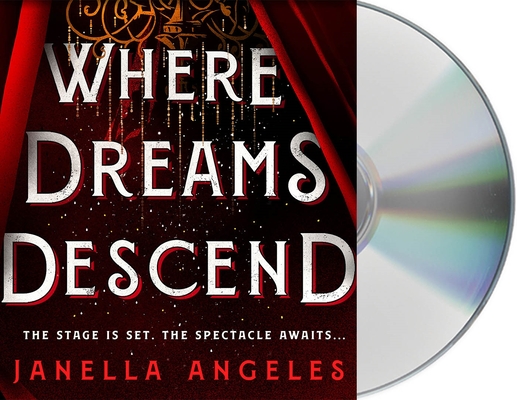 "Narrators Imani Jade Powers and Steve West team up to deliver an emotionally engrossing performance of this YA fantasy...[They] hook listeners from the first page." -- AudioFile Magazine

In a city covered in ice and ruin, a group of magicians face off in a daring game of magical feats to find the next headliner of the Conquering Circus, only to find themselves under the threat of an unseen danger striking behind the scenes.

As each act becomes more and more risky and the number of missing magicians piles up, three are forced to reckon with their secrets before the darkness comes for them next.

The Star: Kallia, a powerful showgirl out to prove she’s the best no matter the cost

The Master: Jack, the enigmatic keeper of the club, and more than one lie told

The Magician: Demarco, the brooding judge with a dark past he can no longer hide

Where Dreams Descend is the startling and romantic first audiobook in Janella Angeles’ debut Kingdom of Cards fantasy duology where magic is both celebrated and feared, and no heart is left unscathed.

"[A] spellbinding melody of a book, and the true magic is how Angeles puts all the best parts of an enrapturing theatrical performance onto paper and ink. From the gripping twists in the first pages all the way to the final, heartbreaking crescendo, Where Dreams Descend will surge you to your feet in a standing ovation.” – Sara Raasch, New York Times bestselling author of the Snow Like Ashes trilogy

JANELLA ANGELES is the Filipino-American bestselling author of Where Dreams Descend. She got her start in writing through consuming glorious amounts of fanfiction at a young age—which eventually led to creating original stories of her own. She currently resides in Massachusetts where she works in the business of publishing books on top of writing them, and is most likely to be found listening to musicals on repeat while daydreaming too much for her own good.