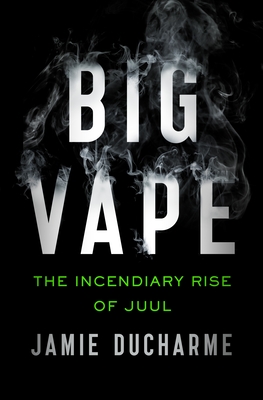 A Publishers Weekly Top Ten Book of the Summer (2021)

A propulsive, eye-opening work of reporting, chronicling the rise of Juul and the birth of a new addiction

It began with a smoke break. James Monsees and Adam Bowen were two ambitious graduate students at Stanford, and in between puffs after class they dreamed of a way to quit smoking. Their solution became the Juul, a sleek, modern device that could vaporize nicotine into a conveniently potent dosage. The company they built around that device, Juul Labs, would go on to become a $38 billion dollar company and draw blame for addicting a whole new generation of underage tobacco users.

Time magazine reporter Jamie Ducharme follows Monsees and Bowen as they create Juul and, in the process, go from public health visionaries and Silicon Valley wunderkinds to two of the most controversial businessmen in the country.

With rigorous reporting and clear-eyed prose that reads like a nonfiction thriller, Big Vape uses the dramatic rise of Juul to tell a larger story of big business, Big Tobacco, and the high cost of a product that was too good to be true.

Jamie Ducharme is a staff writer at Time magazine, where she covers health and science. Her work has won awards from the Deadline Club, the New York Press Club, and the Newswomen’s Club of New York. Originally from New Hampshire, Jamie now lives in Brooklyn. Big Vape is her first book.

Chasing the Thrill: Obsession, Death, and Glory in America's Most Extraordinary Treasure Hunt

What Happened to You?: Conversations on Trauma, Resilience, and Healing

The Bomber Mafia: A Dream, a Temptation, and the Longest Night of the Second World War

The Secret to Superhuman Strength

That Summer: A Novel