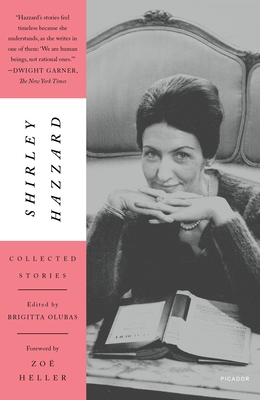 Shirley Hazzard's Collected Stories is a work of staggering breadth and accomplishment. Taken together, these twenty-eight short stories are masterworks in telescoping focus, ranging from quotidian struggles between beauty and pragmatism to satirical send-ups of international bureaucracy, from the Italian countryside to suburban Connecticut. Hazzard's heroes are high-minded romantics who attempt to fit their feelings into the twentieth-century world of office jobs and dreary marriages. After all, as she writes in "The Picnic," "It was tempting to confine oneself to what one could cope with. And one couldn't cope with love." And yet it is the comedy, the tragedy, and the splendor of love, the pursuit and the absence of it, that animates Hazzard's stories and provides the truth and beauty that her protagonists seek.

Hazzard once said, "The idea that somebody has expressed something, in a supreme way, that it can be expressed; this is, I think, an enormous feature of literature." Her stories themselves are a supreme evocation of writing at its very best: probing, uncompromising, and deeply felt.

Shirley Hazzard (1931-2016) was born in Australia, and in early years traveled the world with her parents due to their diplomatic postings. At sixteen, living in Hong Kong, she was engaged by British Intelligence, where, in 1947-48, she was involved in monitoring the civil war in China. Thereafter, she lived in New Zealand and in Europe; in the United States, where she worked for the United Nations Secretariat in New York; and in Italy. In 1963, she married the writer Francis Steegmuller, who died in 1994.

Brigitta Olubas is a professor of English at the University of New South Wales, Sydney. She recently edited We Need Silence to Find Out What We Think: Selected Essays by Shirley Hazzard and Hazzard's Collected Stories.

Zoë Heller was born in London and lives in New York City. She was a columnist for London's Daily Telegraph, she has contributed to such publications as Vanity Fair, The New Yorker, The Independent, The Sunday Times (London), and The New Republic. She is the author of the novels What Was She Thinking? (Notes on a Scandal), The Believers, and Everything You Know. What Was She Thinking? was shortlisted for the Man Booker Prize.