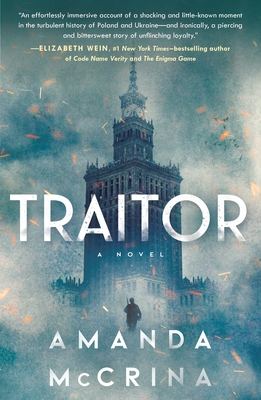 By  Amanda McCrina
Paperback
$ 10.99
Likely On Our Shelves

Amanda McCrina's Traitor is a tightly woven YA thrill ride exploring political conflict, deep-seated prejudice, and the terror of living in a world where betrayal is a matter of life or death.

“Alive with detail and vivid with insight, Traitor is an effortlessly immersive account of a shocking and little-known moment in the turbulent history of Poland and Ukraine—and ironically, a piercing and bittersweet story of unflinching loyalty. I think Tolya has left my heart a little damaged forever.” —Elizabeth Wein, #1 New York Times Bestselling Author of Code Name Verity and The Enigma Game

Poland, 1944. After the Soviet liberation of Lwów from Germany, the city remains a battleground between resistance fighters and insurgent armies, its loyalties torn between Poland and Ukraine.

Seventeen-year-old Tolya Korolenko is half Ukrainian, half Polish, and he joined the Soviet Red Army to keep himself alive and fed. When he not-quite-accidentally shoots his unit's political officer in the street, he's rescued by a squad of Ukrainian freedom fighters. They might have saved him, but Tolya doesn't trust them. He especially doesn't trust Solovey, the squad's war-scarred young leader, who has plenty of secrets of his own.

Then a betrayal sends them both on the run. And in a city where loyalty comes second to self-preservation, a traitor can be an enemy or a savior—or sometimes both.

This title has common core connections.

Amanda McCrina was homeschooled through high school and graduated from the University of West Georgia with a BA in history and political science. For three years, she taught high school English and government at an international school in Madrid, Spain, and is now a bookseller in Franklin, Tennessee. She is the author of Traitor and The Silent Unseen.