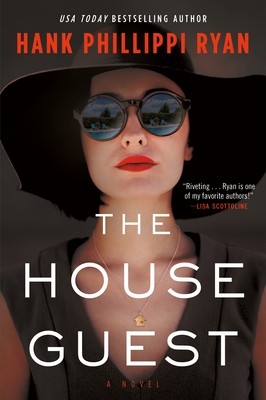 By  Hank Phillippi Ryan
Hardcover
$ 27.99
Pre-Order (Not Yet Published)

We are thrilled to offer SIGNED AND PERSONALIZED copies of The House Guest by Hank Phillippi Ryan!

Through 2/6/23, place an order for The House Guest on this page to have your copy signed & personalized by the author. To have your book signed, you must put "SIGNED TO _____" (your personalization request) in the comment field at checkout.

Personalizations are names only - no messages, quotes, or drawings. Offer ends at midnight Eastern Time on 2/6/23. Online orders only - in-store or phone orders do not qualify. Books will be signed AFTER 2/6/23. We will let you know as soon as your order is ready for you!

After every divorce, one spouse gets all the friends. What does the other one get? If they’re smart, they get the benefits. Alyssa Macallan is terrified when she’s dumped by her wealthy and powerful husband. With a devastating divorce looming, she begins to suspect her toxic and manipulative soon-to-be-ex is scheming to ruin her—leaving her alone and penniless. And when the FBI shows up at her door, Alyssa knows she really needs a friend.

And then she gets one. A seductive new friend, one who’s running from a dangerous relationship of her own. Alyssa offers Bree Lorrance the safety of her guest house, and the two become confidantes. Then Bree makes a heart-stoppingly tempting offer. Maybe Alyssa and Bree can solve each others’ problems.

But no one is what they seem. And the fates and fortunes of these two women twist and turn until the shocking truth emerges: You can’t always get what you want. But sometimes you get what you deserve.

Other books by Hank Phillippi Ryan:
Her Perfect Life
The First to Lie
The Murder List
On the House
Trust Me

THE JANE RYLAND SERIES:
The Other Woman / The Wrong Girl / Truth Be Told / What You See / Say No More