Her Country: How the Women of Country Music Busted Up the Old Boys Club 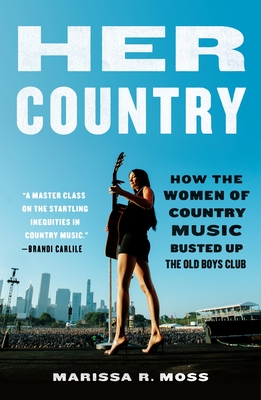 Her Country: How the Women of Country Music Busted Up the Old Boys Club

In country music, the men might dominate the radio waves. But it’s women—like Maren Morris, Mickey Guyton, and Kacey Musgraves—who are making history.

This is the full and unbridled story of the past twenty years of country music seen through the lens of these trailblazers’ careers—their paths to stardom and their battles against a deeply embedded boys’ club, as well as their efforts to transform the genre into a more inclusive place—as told by award-winning Nashville journalist Marissa R. Moss.

For the women of country music, 1999 was an entirely different universe—a brief blip in time, when women like Shania Twain and the Chicks topped every chart and made country music a woman’s world. But the industry, which prefers its stars to be neutral, be obedient, and never rock the boat, had other plans. It wanted its women to “shut up and sing”—or else.

In 2021, women are played on country radio as little as 10 percent of the time, but they’re still selling out arenas, as Kacey Musgraves does, and becoming infinitely bigger live draws than most of their male counterparts, creating massive pop crossover hits like Maren Morris’s “The Middle,” pushing the industry to confront its racial biases with Mickey Guyton’s “Black Like Me,” and winning heaps of Grammy nominations.

Her Country is the story of how in the past two decades, country’s women fought back against systems designed to keep them down and created entirely new pathways to success. It’s the behind-the-scenes story of how women like Kacey, Mickey, Maren, Miranda Lambert, Rissi Palmer, Brandi Carlile, and many more have reinvented their place in an industry stacked against them. When the rules stopped working for these women, they threw them out, made their own, and took control—changing the genre forever, and for the better.

An award-winning journalist, Marissa R. Moss has written about the topic of gender inequality on the country airwaves for outlets like Rolling Stone, NPR, Billboard, Entertainment Weekly, and many more. Moss was the 2018 recipient of the Rolling Stone Chet Flippo Award for Excellence in Country Music Journalism, and the 2019 Nashville Scene Best of Nashville Best Music Reporter. She has been a guest on The TODAY Show, Entertainment Tonight, CBS Morning Show, NPR’s Weekend Edition, WPLN, the Pop Literacy Podcast, and more.