Teddy Roosevelt Was a Moose? (Wait! What?) 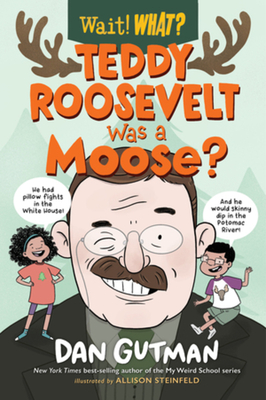 Teddy Roosevelt Was a Moose? (Wait! What?)

From the best-selling author of My Weird School: a new entry in the offbeat and engaging biography series that casts fresh light on high-interest historic figures.

Did you know that Theodore Roosevelt was shot before a rally, and went on to give his speech with the bullet in his chest? Or that he skinny-dipped in the Potomac River? Bet you didn’t know that he had a zebra, a lion, and a one-legged rooster at the White House! Siblings Paige and Turner have collected some of the most unusual and surprising facts about the larger-than-life president, from his childhood and his Rough Rider days to his rise to politics and his complicated presidential legacy.

Dan Gutman is the New York Times best-selling author of the Genius Files series, the My Weird School series, and his baseball card adventure series. Dan has received nineteen state book awards. He lives in New York City with his wife, Nina.