Mistrust: Why Losing Faith in Institutions Provides the Tools to Transform Them 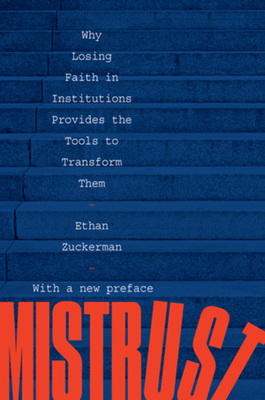 Mistrust: Why Losing Faith in Institutions Provides the Tools to Transform Them

By  Ethan Zuckerman
Paperback
$ 17.95
Out of Stock In Store (Available to Order)

The rise of mistrust is provoking a crisis for representative democracy—solutions lie in the endless creativity of social movements.

From the Tea Party to Occupy Wall Street, and from cryptocurrency advocates to the #MeToo movement, Americans and citizens of democracies worldwide are losing confidence in what we once called the system.

This loss of faith has spread beyond government to infect a broad swath of institutions—the press, corporations, digital platforms—none of which seem capable of holding us together. The dominant theme of contemporary civic life is mistrust in institutions—governments, big business, the health care system, the press.

How should we encourage participation in public life when neither elections nor protests feel like paths to change? Drawing on work by political scientists, legal theorists, and activists in the streets, Ethan Zuckerman offers a lens for understanding civic engagement that focuses on efficacy, the power of seeing the change you make in the world.

Mistrust introduces a set of "levers"—law, markets, code, and norms—that all provide ways to move the world. Zuckerman helps readers understand what relationships they want to have with existing institutions—Do they want to hold them responsible and make them better? Overthrow them and replace them with something entirely new? While some contemporary leaders weaponize mistrust to gain power, activists can use their mistrust to fuel something else.

Today, many people are passionate about making positive change in the world, but they feel like the "right" ways to make change are disempowering and useless. Zuckerman argues that while it may be reasonable to dispense with politics as usual, we must not give up on changing the world. Often the best way to make that change is not to pass laws—it’s to change minds.

Mistrust is a guidebook for those looking for new ways to participate in civic life, as well as a fascinating explanation of how we’ve arrived at a moment where old ways of engagement are failing us.

Ethan Zuckerman is the founder of the Institute for Digital Public Infrastructure at the University of Massachusetts Amherst and associate professor of public policy, information, and communication. From 2011–20, he led the Center for Civic Media at the MIT Media Lab. He is cofounder with Rebecca MacKinnon of the international blogging community Global Voices.