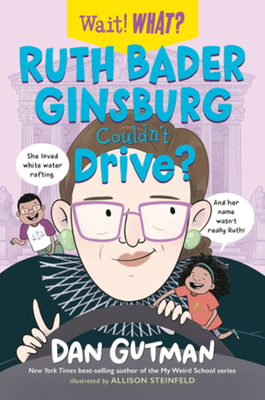 By  Dan Gutman , Illustrated By  Allison Steinfeld
Paperback
$ 6.95
Pre-Order (Not Yet Published)

From the best-selling author of My Weird School: a new entry in the cheerful and engaging biography series centered on high-interest historic figures.

Did you know that Ruth Bader Ginsburg failed her driving test five times? Or that her real name was Joan? Bet you didn’t know that she liked paddle boarding, white water rafting, and riding elephants! She even had a praying mantis named after her. Siblings Paige and Turner have collected some of the most unusual and surprising facts about one of the most famous Supreme Court Justices in history, from her childhood to her rise as the superstar Notorious R.B.G.

Dan Gutman is the New York Times best-selling author of the Genius Files series, the My Weird School series, and his baseball card adventure series. Dan has received nineteen state book awards. He lives in New York City with his wife, Nina.