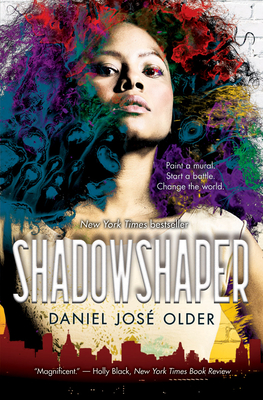 By  Daniel José Older
Paperback
$ 9.99
Out of Stock In Store

Come to the crossroads, to the crossroads comeSierra Santiago planned an easy summer of making art and hanging with her friends. But then a corpse crashes the first party of the season. Her stroke-ridden grandfather starts apologizing over and over. And when the murals in her neighborhood begin to weep real tears . . . Well, something more sinister than the usual Brooklyn ruckus is going on.Where the powers converge and become oneWith the help of a fellow artist named Robbie, Sierra discovers shadowshaping, a thrilling magic that infuses ancestral spirits into paintings, music, and stories. But someone is killing the shadowshapers one by one -- and the killer believes Sierra is hiding their greatest secret. Now she must unravel her family's past, take down the killer in the present, and save the future of shadowshaping for herself and generations to come.Full of a joyful, defiant spirit and writing as luscious as a Brooklyn summer night, Shadowshaper introduces a fantasy heroine and magic unlike any you've ever seen before, and marks the YA debut of a brilliant new storyteller.

Daniel José Older has always loved monsters, whether historical, prehistorical, or imaginary. His debut series for young adults, the Shadowshaper Cypher, has earned starred reviews, the International Latino Book Award, and New York Times Notable Book and NPR Best Book of the Year picks, among other accolades. His debut middle-grade series, Dactyl Hill Squad, was named to the New York Times Notable Book list and to the NPR and Washington Post Best Book of the Year lists, among others. He has worked as a bike messenger, a waiter, and a teacher, and was a New York City paramedic for ten years. Daniel splits his time between Brooklyn and New Orleans.