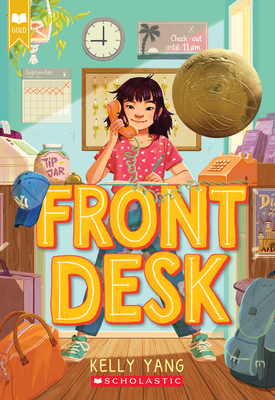 By  Kelly Yang
Paperback
$ 7.99
On Our Shelves Now

Four starred reviews and over ten best-of-year lists!* "Many readers will recognize themselves or their neighbors in these pages." -- Kirkus Reviews, starred review

Winner of the Asian / Pacific American Award for Children's Literature!* "Many readers will recognize themselves or their neighbors in these pages." -- Kirkus Reviews, starred reviewMia Tang has a lot of secrets.Number 1: She lives in a motel, not a big house. Every day, while her immigrant parents clean the rooms, ten-year-old Mia manages the front desk of the Calivista Motel and tends to its guests.Number 2: Her parents hide immigrants. And if the mean motel owner, Mr. Yao, finds out they've been letting them stay in the empty rooms for free, the Tangs will be doomed.Number 3: She wants to be a writer. But how can she when her mom thinks she should stick to math because English is not her first language?It will take all of Mia's courage, kindness, and hard work to get through this year. Will she be able to hold on to her job, help the immigrants and guests, escape Mr. Yao, and go for her dreams?Featuring exclusive bonus content!

Kelly Yang is the author of Front Desk, which won the 2019 Asian/Pacific American Award for Literature and was chosen a Best Book of the Year by multiple publications, including NPR, the Washington Post, and the New York Public Library. Kelly's family immigrated to the United States from China when she was a young girl, and she grew up in California, in circumstances very similar to those of Mia Tang. She eventually left the motels and went to college at the age of 13, and is a graduate of UC Berkeley and Harvard Law School. She is the founder of The Kelly Yang Project, a leading writing and debating program for children in Asia and the United States. Her writing has been published in the South China Morning Post, the New York Times, the Washington Post, and the Atlantic. To learn more about her and the Front Desk books, visit frontdeskthebook.com.

Mia's Chinese immigrant family thinks their luck has finally changed when they become caretakers of a hotel - but things are never simple, are they? An awesome novel about family, community, and thriving in a world that isn't always fair.