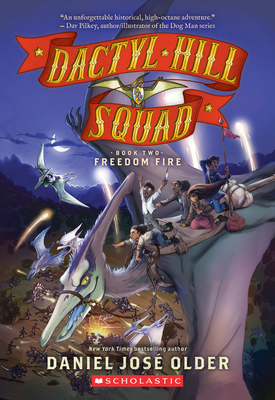 By  Daniel José Older
Paperback
$ 6.99
Out of Stock In Store (Click to Order)

Magdalys and the squad are flying south on pteroback. South to rescue her older brother. South to war.The squad links up with the dino-mounted troops of the Louisiana Native Guard, an all-black regiment in the Union Army fighting to free their people. They're led by General Sheridan, surrounded by enemy forces in Tennessee and desperate for any edge to sway the tide of battle. Magdalys's burgeoning powers might be the Union's last hope. But she doesn't want to abandon the search for her brother. And she might not be the only one with a mysterious connection to dinosaurs.With the Civil War raging around her and the Union on the brink of collapse, how can Magdalys choose between the army that needs her help to survive and the brother she risked everything to save?

Daniel José Older has always loved monsters, whether historical, prehistorical, or imaginary. His debut series for young adults, the Shadowshaper Cypher, has earned starred reviews, the International Latino Book Award, and New York Times Notable Book and NPR Best Book of the Year picks, among other accolades. His debut middle-grade series, Dactyl Hill Squad, was named to the New York Times Notable Book list and to the NPR and Washington Post Best Book of the Year lists, among others. He has worked as a bike messenger, a waiter, and a teacher, and was a New York City paramedic for ten years. Daniel splits his time between Brooklyn and New Orleans.