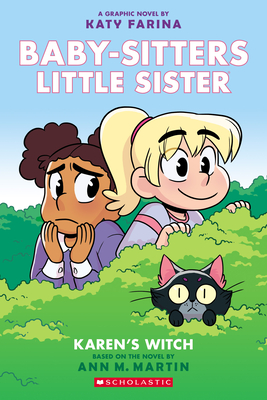 By  Ann M. Martin , Illustrated By  Katy Farina
Paperback
$ 10.99
On Our Shelves Now

Karen Brewer lives next door to Mrs. Porter, who wears long robes and has wild gray hair. Mrs. Porter has a black cat named Midnight and always seems to be working in her garden. Karen isn't supposed to spy on her neighbor, but she's determined to prove that Mrs. Porter is a witch named Morbidda Destiny!Mrs. Porter is getting ready to have a special meeting at her house, and Karen is sure the meeting is for witches. Are they going to cast a spell on Karen? Or will she be brave enough to send them away -- once and for all?

Katy Farina is the creator of the New York Times bestselling graphic novel adaptations of the Baby-sitters Little Sister series by Ann M. Martin. She has painted backgrounds for She-Ra and the Princesses of Power at DreamWorks TV and has also done work for BOOM! Studios, Oni Press, and Z2 Comics. She lives in Los Angeles. Visit her online at katyfarina.com.
Ann M. Martin is the creator of The Baby-sitters Club, which has more than 190 million books in print, making it one of the most popular series in the history of publishing. Her novels include A Corner of the Universe (a Newbery Honor Book), Belle Teal, Here Today, A Dog's Life, On Christmas Eve, and the Main Street and Family Tree series, as well as the much-loved collaborations P.S. Longer Letter Later and Snail Mail No More, with Paula Danziger. Ann lives in upstate New York.