Fortress of the Stone Dragon: A Branches Book (Dragon Masters #17) 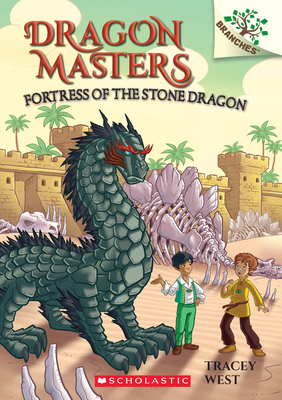 Fortress of the Stone Dragon: A Branches Book (Dragon Masters #17)

By  Tracey West , Illustrated By  Matt Loveridge
Paperback
$ 5.99
Likely On Our Shelves

Drake has to stop an evil wizard in this action-packed, New York Times bestselling series!

Pick a book. Grow a Reader!This series is part of Scholastic's early chapter book line, Branches, aimed at newly independent readers. With easy-to-read text, high-interest content, fast-paced plots, and illustrations on every page, these books will boost reading confidence and stamina. Branches books help readers grow!An evil wizard named Astrid is plotting to become the most powerful wizard in the world. She is collecting ingredients for a dangerous spell, and it is up to the Dragon Masters to stop her from casting it. Drake and Mina travel to the Fortress of the Stone Dragon to warn the Stone Dragon's Dragon Master, Caspar, that Astrid is on her way there. But will the evil wizard's dark magic overpower the Dragon Masters?

Tracey West is the author of the New York Times bestselling series Dragon Masters, for Scholastic Branches. She has written more than 400 books for children, including the Underdogs series, illustrated by Kyla May; the Pixie Tricks series, illustrated by Xavier Bonet, and the perennially popular Pokémon chapter books. She lives with her husband, adopted dogs, and chickens in the western Catskill mountains of New York State.
Matt Loveridge likes to draw subjects that expose the lighter side of life, so he loves illustrating children’s books! He has illustrated several children's book series, including Dragon Masters written by Tracey West. Matt lives in Utah with his beautiful, supportive wife and their three rambunctious kids (who are a constant source of inspiration!).