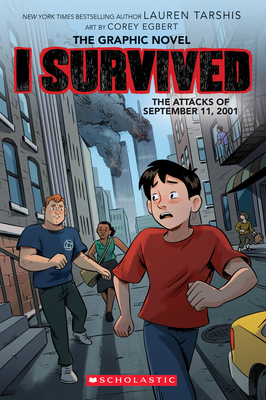 A gripping graphic novel adaptation of Lauren Tarshis's bestselling I Survived the Attacks of September 11, 2001, in time for the 20th anniversary of 9/11.

The only thing Lucas loves more than football is his Uncle Benny, his dad's best friend at the fire department where they both work. Benny taught Lucas everything about football. So when Lucas's parents decide the sport is too dangerous and he needs to quit, Lucas has to talk to his biggest fan.The next morning, Lucas takes the train to the city instead of the bus to school. It's a bright, beautiful day in New York. But just as Lucas arrives at his uncle's firehouse, everything changes -- and nothing will ever be the same again.Lauren Tarshis's New York Times bestselling I Survived series comes to vivid life in bold graphic novels. Perfect for readers who prefer the graphic novel format, or for existing fans of the I Survived chapter book series, these graphic novels combine historical facts with high-action storytelling that's sure to keep any reader turning the pages. Includes a nonfiction section at the back with facts and photos about the real-life event.

Lauren Tarshis's New York Times bestselling I Survived series tells stories of young people and their resilience and strength in the midst of unimaginable disasters and times of turmoil. Lauren has brought her signature warmth and exhaustive research to topics such as the battle of D-Day, the American Revolution, Hurricane Katrina, the bombing of Pearl Harbor, and other world events. She lives in Connecticut with her family, and can be found online at laurentarshis.com.
Corey Egbert is a children’s illustrator and author based in rural Virginia. He believes in telling imaginative, funny, and touching stories that empower kids to make their world better. He studied at Snow College, Southern Virginia University, and Syracuse University. Corey lives with his wife, son, and two cats in a little house by the woods. Visit him online at coreyegbert.com.