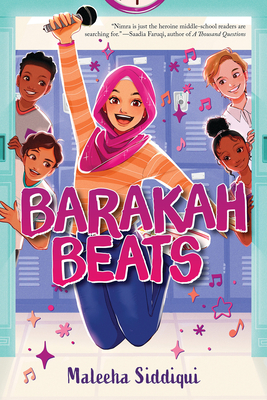 By  Maleeha Siddiqui
Hardcover
$ 17.99
Out of Stock In Store

"This book about friendship and faith absolutely sings." -- Buzzfeed

Perfect for fans of The First Rule of Punk or Save Me a Seat, this is a sweet, powerful, and joyous novel about a girl who finds her voice on her own terms.

Twelve-year-old Nimra Sharif has spent her whole life in Islamic school, but now it's time to go to "real school."

Nimra's nervous, but as long as she has Jenna, her best friend who already goes to the public school, she figures she can take on just about anything.

Unfortunately, middle school is hard. The teachers are mean, the schedule is confusing, and Jenna starts giving hijab-wearing Nimra the cold shoulder around the other kids.

Desperate to fit in and get back in Jenna's good graces, Nimra accepts an unlikely invitation to join the school's popular 8th grade boy band, Barakah Beats. The only problem is, Nimra was taught that music isn't allowed in Islam, and she knows her parents would be disappointed if they found out. So she devises a simple plan: join the band, win Jenna back, then quietly drop out before her parents find out.

But dropping out of the band proves harder than expected. Not only is her plan to get Jenna back working, but Nimra really likes hanging out with the band—they value her contributions and respect how important her faith is to her. Then Barakah Beats signs up for a talent show to benefit refugees, and Nimra's lies start to unravel. With the show only a few weeks away and Jenna's friendship hanging in the balance, Nimra has to decide whether to betray her bandmates—or herself.

Maleeha Siddiqui is a first-generation Pakistani-American Muslim living in Virginia. When she isn't writing, she can be found working at a biotech company or hanging out with her family. Barakah Beats is based on her own experiences growing up in America as a young practicing Muslim.