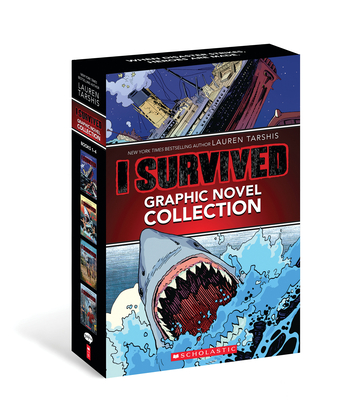 With text adapted by Georgia Ball and art by Haus Studio, Álvaro Sarraseca, and Corey Egbert, these graphic novels combine historical facts with high-action storytelling that's sure to keep any reader turning the pages. Each book includes a nonfiction section at the back with facts and photos about the real-life event.

The set is perfect for I Survived fans as well as any reader interested in stories of disaster and survival, or who wants an action-packed experience of the events that have shaped history.

I Survived the Sinking of the Titanic, 1912 (I Survived Graphic Novel #1): George Calder must be the luckiest kid alive he and his little sister, Phoebe, are sailing with their aunt on the Titanic, the greatest ship ever built! But one night while George is off exploring, a terrible boom shakes the entire boat. George has always gotten out of trouble before. Can he survive this nightmare?

I Survived the Shark Attacks of 1916 (I Survived Graphic Novel #2): Chet Roscow is finally feeling at home in his uncle's little New Jersey town. He has three new friends, and they love cooling off in the creek on hot summer days. One afternoon, Chet spots a gray fin in the creek, but it must be his imagination It's impossible he's about to come face-to-face with a killer shark... right?

I Survived the Nazi Invasion, 1944 (I Survived Graphic Novel #3): It's been years since the Nazis invaded Max Rosen's home country of Poland. All the Jewish people, including Max's fam­ily, have been forced to live in a ghetto. One day, Max and his sister, Zena, make a dar­ing escape into the nearby forest, where they are rescued by Jewish resistance fighters. But soon, grenades are falling all around them. Can Max and Zena survive the fallout of the Nazi invasion?

I Survived the Attacks of September 11, 2001 (I Survived Graphic Novel #4): Hoping to get some advice from his firefighter uncle, eleven-year-old Lucas skips school one beautiful September morning and takes the train into Manhattan. But just as Lucas arrives at his the firehouse, everything changes and nothing will ever be the same again.

Haus Studio was founded in 1997 by a group of friends who self-published their own comics. They are located in Buenos Aires, Argentina, but collaborate with writers and publishers around the world. In addition to their illustration work, the team runs an art school and has organized comic book conventions and other exhibitions in Latin America. Haus Studio artists consider themselves storytellers more than artists, and therefore love working on projects with rich stories to tell.

Álvaro Sarraseca has worked as a magazine cartoonist and graphic novel artist. He has contributed artwork to franchises such as Dragon Age, Jurassic World, and Red Sonja and Vampirella Meet Betty and Veronica, among others. He lives in Madrid, Spain, and can be found online at alvarosarraseca.daportfolio.com.

Lauren Tarshis's New York Times bestselling I Survived series tells stories of young people and their resilience and strength in the midst of unimaginable disasters and times of turmoil. Lauren has brought her signature warmth and exhaustive research to topics such as the battle of D-Day, the American Revolution, Hurricane Katrina, the bombing of Pearl Harbor, and other world events. She lives in Connecticut with her family, and can be found online at laurentarshis.com.
Corey Egbert is a children’s illustrator and author based in rural Virginia. He believes in telling imaginative, funny, and touching stories that empower kids to make their world better. He studied at Snow College, Southern Virginia University, and Syracuse University. Corey lives with his wife, son, and two cats in a little house by the woods. Visit him online at coreyegbert.com.