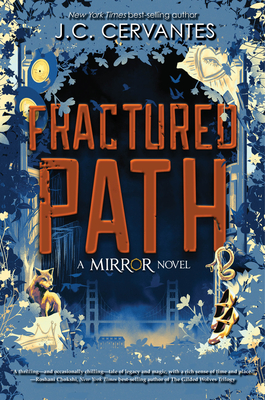 Can dreams come true when you're living with a family curse?

The 1960s are bursting with music and movement and love in San Francisco, perfect for a budding artist like Blake. Unfortunately, the art world is not welcoming to people of her gender or her multi-racial heritage, making it tough to land an internship that could put her on the map. That, plus the fact that Blake’s family has been notoriously riddled with bad luck, makes her feel like she can’t catch a break. Things only get worse when Blake starts to have ominous, confusing visions that grow stronger and more frequent, prompting Blake’s aunt and uncle to tell her about a long-lost family heirloom that could be the key to everything

Fueled by the ambiguous clues in her visions, Blake sets out on a journey through the city to retrieve her ancestors’ legendary mirror. But Blake is not the only one looking for it. Soon she must attempt to unleash her own dormant powers . . . or else risk all she holds dear.

The Mirror: Fractured Path is the third book in the innovative YA fairy-tale quartet, following one family—and the curse that plagues it—over several generations.


Unravel the secrets of this family curse in the other books in THE MIRROR:

J. C. Cervantes (www.jccervantes.com) is the New York Times best-selling author of The Storm Runner, which Booklist called "a rip-roaring adventure" in a starred review. Her first novel, Tortilla Sun, was a 2010 New Voices pick by the American Booksellers Association and was named to Bank Street's 2011 Best Book List. Jen grew up in San Diego and was fascinated by stories about Maya gods and magic. Follow her on Facebook, Twitter: @jencerv, and Instagram: #authorjcervantes.