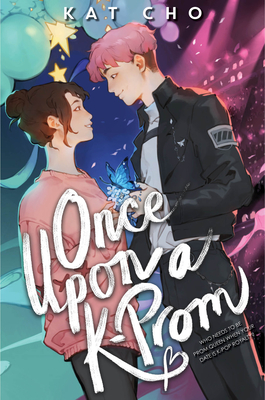 What would you do if the world's biggest K-pop star asked you to prom? Perfect for fans of Jenny Han and Sandhya Menon, this hilarious and heartfelt novel brings the glamour and drama of the K-pop world straight to high school.

Elena Soo has always felt overshadowed. Whether by her more successful older sisters, her more popular twin brother, or her more outgoing best friend, everyone except Elena seems to know exactly who they are and what they want. But she is certain about one thing - she has no interest in going to prom. While the rest of the school is giddy over corsages and dresses, Elena would rather spend her time working to save the local community center, the one place that's always made her feel like she belonged.

So when international K-pop superstar Robbie Choi shows up at her house to ask her to prom, Elena is more confused than ever. Because the one person who always accepted Elena as she is? Her childhood best friend, Robbie Choi. And the one thing she maybe, possibly, secretly wants more than anything? For the two of them to keep the promise they made each other as kids: to go to prom together. But that was seven years ago, and with this new K-pop persona, pink hair, and stylish clothes, Robbie is nothing like the sweet, goofy boy she remembers. The boy she shared all her secrets with. The boy she used to love.

Besides, prom with a guy who comes with hordes of screaming fans, online haters, and relentless paparazzi is the last thing Elena wants - even if she can't stop thinking about Robbie's smile...right?

Kat Cho is a New York Times best-selling YA author who loves to incorporate her Korean heritage in her writing, especially if it involves describing food. She loves anything that encourages nerding out, including reading, K-dramas, K-pop, and anime. She's the author of Wicked Fox and Vicious Spirits. Kat lives and works in New York City. Find her online at Twitter @KatCho, Instagram @KatChoWrites, and KatChoWrites.com