Rise of the Black Quarterback: What It Means for America 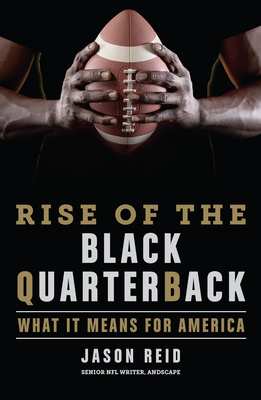 Rise of the Black Quarterback: What It Means for America

A compulsively readable sports narrative by senior NFL writer for ESPN’s The Undefeated (now Andscape), Jason Reid, chronicling both the history of Black players in the NFL, such as Warren Moon, and the recent careers of groundbreaking Black quarterbacks, including Colin Kaepernick.

In September 2019, ESPN's The Undefeated website (now Andscape) began a season-long series of articles on the emergence of Black quarterbacks in the NFL. The first article in the series was Jason Reid's enormously popular, "Welcome to the Year of the Black Quarterback." The series culminated with an hour-long television program in February 2020, hosted by Reid himself. The Rise of the Black Quarterback: What It Means for America will expand on Reid's piece—as well as the entire series—and chronicle the shameful history of the treatment of Black players in the NFL and the breakout careers of a thrilling new generation of Black quarterbacks. Intimate portraits of Colin Kaepernick, Patrick Mahomes, Lamar Jackson, and Kyler Murray feature prominently in the book, as well as the careers and legacy of beloved NFL players such as Doug Williams and trailblazing pioneers Marlin Briscoe and Eldridge Dickey. Reid delves deeply into the culture war ignited by Kaepernick's peaceful protest that shone a light on systemic oppression and police brutality. Fascinating and timely, this page-turning account will rivet fans of sports, cultural commentary, and Black history in America.

Jason Reid was named senior NFL writer for The Undefeated (now Andscape), ESPN’s platform exploring the intersections of sports, race and culture, in January 2016, after serving as an NFL columnist for ESPN.com for a year. He joined ESPN in February 2015 as an NFL columnist and his work appeared on the NFL pages of ESPN.com. Prior to joining ESPN, Reid covered the Los Angeles Dodgers for the Los Angeles Times, the Washington Commanders for The Washington Post and was a general sports columnist for The Post. At Andscape, some of Reid’s NFL work includes The Puzzling Plummet of RGIII—an in-depth look at how former Commanders quarterback Robert Griffin III fell out of favor with the team; and enterprise reporting around the NFL’s support of social justice organization in the wake of players’ protests, and the ensuing discord among the players. In April 2017, Reid co-authored The NFL’s Racial Divide—a long-form investigation about the role that race plays in the construction of NFL rosters—which won the 2018 NABJ Salute to Excellence Award in the sports digital media category.