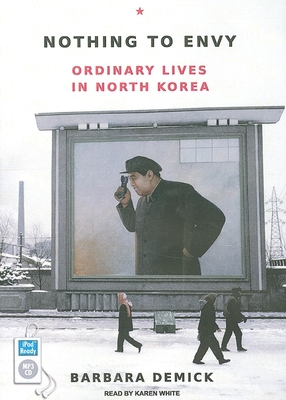 Barbara Demick's Nothing to Envy follows the lives of six North Koreans over fifteen years-a chaotic period that saw the death of Kim Il-sung and the unchallenged rise to power of his son, Kim Jong-il, and the devastation of a far-ranging famine that killed one-fifth of the population. Taking us into a landscape never before seen, Demick brings to life what it means to be an average Korean citizen, living under the most repressive totalitarian regime today-an Orwellian world in which radio and television dials are welded to the one government station, a country that is by choice not connected to the Internet, a society in which outward displays of affection are punished, and a police state that rewards informants and where an offhanded remark can send a citizen to the gulag for life. Demick's subjects-a middle-aged party loyalist and her rebellious daughter, an idealistic female doctor, an orphan, and two young lovers-all hail from the same provincial city in the farthest-flung northern reaches of the country. One by one, we witness the moments of revelation, when each realizes that they have been betrayed by the Fatherland and that their suffering is not a global condition but is uniquely theirs. Nothing to Envy is the first book about North Korea to go deep inside the country, beyond the reach of government censors, and penetrate the mind-set of the average citizen. It is a groundbreaking and essential addition to the literature of totalitarianism.

Barbara Demick is a foreign correspondent for the "Los Angeles Times" based in Beijing and the author of "Logavina Street: Life and Death in a Sarajevo Neighborhood."

Karen White has been narrating and directing audiobooks for more than a dozen years and has well over one hundred books to her credit. Honored to be included among "AudioFile"'s Best Voices 2010 and 2011, she is also an Audie Award finalist and has earned multiple "AudioFile" Earphones Awards for narration and direction.