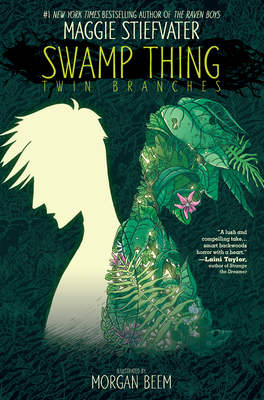 By  Maggie Stiefvater , Illustrated By  Morgan Beem
$ 16.99
Out of Stock In Store

#1 New York Times bestselling author Maggie Stiefvater (the Raven Cycle series) and artist Morgan Beem unearth the primal power of memory and how it twists the bond between two brothers.

Twins Alec and Walker Holland have a reputation around town. One is quiet and the other is the life of any party, but the two are inseparable. For their last summer before college, Alec and Walker leave the city to live with their rural cousins, where they find that the swamp holds far darker depths than they could have imagined.

While Walker carves their names into the new social scene, laboratory, Alex recedes into a summer-school laboratory, because he brought something from home on their trip--it's an experiment that will soon consume him. This season, both brothers must confront truths, ancient and familial, and as their lives diverge, tensions increase and dormant memories claw to the surface.

From #1 New York Times bestselling authorMaggie Stiefvater (the Raven Cycle series) and artist Morgan Beem comes a story of shadows, both literal and imagined--and those that take form and haunt us.

Maggie Stiefvater is the #1 New York times bestselling author of The Raven Cycle, the Shiver trilogy, and other novels for young and adult readers. She is also an artist, an auto enthusiast, and a bagpiper. She lives on a farm in the Shenandoah Valley with her husband, two children, and an assortment of fainting goats.

Morgan Beem is a freelance artist and member of the Jam House collective located in Denver, Colorado. Her work is predominantly in comics and illustration. She has worked on such properties as Adventure Time, Planet of the Apes, and Buffy the Vampire Slayer and is the co-creator of the comic The Family Trade, alongside writers Justin Jordan and Nikki Ryan, from Image Comics.