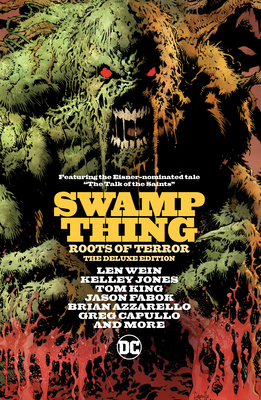 Well-known writers Tom King (Batman, Heroes in Criris) and Brian Azzarello (Batman: Damned, Joker) pay tribute to the legendary creators of Swamp Thing as they join forces for earth-shattering Swamp Thing tales that will send chills down your spine!

From some of comics' greatest writers and artists comes a collection of horrifying tales by the bayou that will warm the heart and haunt the soul. Swamp Thing: Roots of Terror is a celebration of one of comics' most acclaimed characters and his legendary creators, Len Wein and Bernie Wrightson.

New York Times best-selling and Eisner Award-winning writer Tom King (Mister Miracle, Batman) and acclaimed artist Jason Fabok (Detective Comics, Justice League) present "The Talk of the Saints," a story of Swamp Thing shepherding a lost boy through a winter wasteland as a monster hunts them at every turn.

Beyond these tales of shock, horror and love, Swamp Thing: Roots of Terror features a brand-new introduction by photographer, lawyer, creative rights activist and widow of comic book legend Len Wein, Christine Valada. She presents a treasure trove of never-before-seen artwork from the making of these already-classic tales and scripts from Len Wein, Tom King and Mark Russell.

Tom King is a comic book writer and novelist, best known for his work at DC Comics including Batman, Mister Miracle, Grayson and Omega Men. He often relies on his experience as an ex-CIA agent and experiences during the recent conflicts in the Middle East in his writing, especially apparent in Grayson (alongside co-writer Tim Seeley), Omega Men and in The Sheriff of Babylon, published under the Vertigo imprint.