Pawnee: The Greatest Town in America 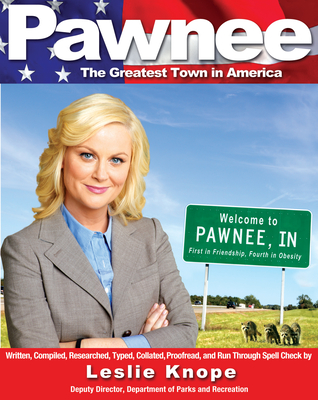 Pawnee: The Greatest Town in America

Welcome to Pawnee: More Exciting than New York, More Glamorous than Hollywood, Roughly the Same Size as Bismarck, North Dakota In Pawnee, Leslie Knope (as played by Amy Poehler on NBC's hit show Parks and Recreation) takes readers on a hilarious tour through her hometown, the Midwestern haven known as Pawnee, Indiana. The book chronicles the city's colorful citizens and hopping nightlife, and also explores some of the most hilarious events from its crazy history -- like the time the whole town was on fire, its ongoing raccoon infestation, and the cult that took over in the 1970s. Packed with laugh-out-loud-funny photographs, illustrations, and commentary by the other inhabitants of Pawnee, it's a must-read that will make you enjoy every moment of your stay in the Greatest Town in America.

Leslie Knope has lived in Pawnee since her childhood. The community programs she enjoyed in her youth inspired her to pursue a life of public service and serve the city. Leslie is a member of several action committees in her role at city hall, including the Equal Opportunity Committee, the Fun in the Sun Committee, the Clean Restroom Task Force, the Handicapped Restroom Task Force and the Task Force to Reduce the Number of Public Restrooms.Her goal is to become the first female President of the United States. Leslie is the Deputy Parks Director of Pawnee's parks and recreation department, a mid-level bureaucrat position. She hopes to advance her career (possibly aiming to jump over the department's Director position and become a City Manager) and improve her town. Leslie also has a love for sweets, especially whipped cream, as she usually adds excessively large amounts to coffee, waffles and other food.