The Narcissism Epidemic: Living in the Age of Entitlement 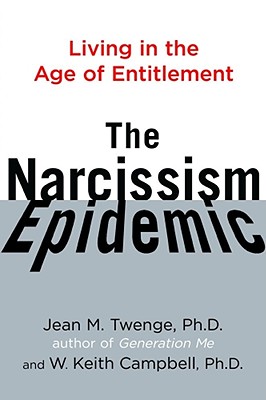 The Narcissism Epidemic: Living in the Age of Entitlement

Narcissism -- a very positive and inflated view of the self -- is everywhere. It's what you have if you're a politician and you've strayed from your wife, and it's whyÊfive times as many Americans undergo plastic surgery and cosmetic procedures today than did just ten years ago. It's the value that parents teach their children with song lyrics like "I am special. Look at me," the skill teenagers and young adults obsessively hone on Facebook and MySpace, and the reason high school students physically beat classmates and then broadcast their violence on YouTube for all to see. It's the message preached by prosperity gospel and the vacuous ethos spread by celebrity newsmakers. And it's what's making people depressed, lonely, and buried under piles of debt.

Jean M. Twenge's influential and controversial first book, Generation Me, generated a national debate with its trenchant depiction of the challenges twenty- and thirtysomethings face emotionally and professionally in today's world -- and the fallout these issues create for older generations as well as employers. Now, Dr. Twenge is on to a new incendiary topic that has repercussions for every age-group and class: the pernicious spread of narcissism in today's culture and its catastrophic effects. Dr. Twenge joins forces with W. Keith Campbell, Ph.D., a nationally recognized expert on narcissism, for The Narcissism Epidemic, their eye-opening exposition of the alarming rise of narcissism -- and they show how to stop it.

Every day, you encounter the real costs of narcissism: in your relationships and family, in the workplace and the economy at large, in schools that fail to teach necessary skills, in culture, and in politics. Even the world economy has been damaged by risky, unrealistic overconfidence. Filled with arresting anecdotes that illustrate the hold narcissism has on us today -- from people hiring fake paparazzi in order to experience feeling famous to college students who won't leave a professor's office until their B+ becomes an A -- The Narcissism Epidemic is at once a riveting window into the consequences of narcissism, a probing analysis of the culture at large, and a prescription to combat the widespread problems caused by narcissism. As a society, we have a chance to slow the epidemic of narcissism once we learn to identify it, minimize the forces that sustain and transmit it, and treat it where we find it. Drawing on their own extensive research as well as decades of other experts' studies, Drs. Twenge and Campbell show us how.

Jean M. Twenge, PhD, a professor of psychology at San Diego State University, is the author of more than a hundred scientific publications and two books based on her research, Generation Me and The Narcissism Epidemic, as well as The Impatient Woman’s Guide to Getting Pregnant. Her research has been covered in Time, The Atlantic, Newsweek, The New York Times, USA TODAY, and The Washington Post. She has also been featured on the Today show, Good Morning America, Fox and Friends, CBS This Morning, and National Public Radio. She lives in San Diego with her husband and three daughters.

W. Keith Campbell, Ph.D., Associate Professor of Psychology at the University of Georgia, is the author of more than 65 scientific journal articles and book chapters and the book, When You Love a Man Who Loves Himself: How to Deal with a One-way Relationship (Sourcebooks, 2005). He has published more than 30 journal articles and chapters on narcissism, more than any other academic researcher. He is also a contributing author of the study on the rise in narcissism covered by the Associated Press. His research has appeared in USA Today, Newsweek, and The Washington Post, and he has been featured on Fox News’ The Big Story and made numerous radio appearances. He holds a BA from the University of California at Berkeley, an MA from San Diego State University, and a Ph.D. from the University of North Carolina at Chapel Hill. He lives in Athens, Georgia, with his wife and daughter.