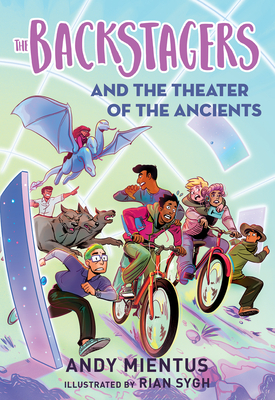 After all the backstage ghost drama during Phantasm, things are quiet at St. Genesius Prep. Too quiet. But when that quiet is filled by a mysterious voice that haunts the Backstagers day and night, they set off on a globe-trotting adventure to discover the ancient secrets of the legendary artifacts of the theater. Can they solve the mystery in time to open their production of the rock musical Tammy? Each Backstager brings unique skills to the team: Mischievous Sasha is impossibly positive, no-nonsense Aziz makes sure everything runs smoothly, whiz-kid Beckett is a perfectionist through and through, flirtatious Hunter knows the backstage better than anyone, and sweet Jory can think his way through any problem. Effortlessly inclusive and full of adventure, The Backstagers and the Theater of the Ancients is sure to have readers calling, “Encore!”

Andy Mientus is an actor, singer, and songwriter who is known for his roles in Spring Awakening, Wicked, and Les Misérables on Broadway and Smash and The Flash on television. He's also the author of three Backstagers novels, which are based on the BOOM! comics. He lives in New York City.

Rian Sygh is a comic artist and cocreator, along with James Tyrion IV, of the award-winning Backstagers comics. He lives in Glendale, California.

Andy Mientus is an actor, singer, and songwriter who is known for his roles in Spring Awakening, Wicked, Les Misérables, Smash, and The Flash. He lives in New York City.