Bipolar Disorder: A Guide for You and Your Loved Ones (Johns Hopkins Press Health Books) 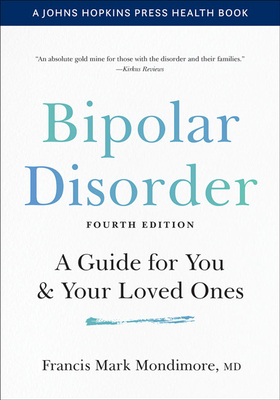 Bipolar Disorder: A Guide for You and Your Loved Ones (Johns Hopkins Press Health Books)

The vital resource for people with bipolar disorder and their loved ones, completely updated.

Compassionate and comprehensive, Dr. Francis Mondimore's pathbreaking guide has helped thousands of people and their loved ones cope with bipolar disorder. Now in its fourth edition, Bipolar Disorder has been totally revised and reorganized to reflect dramatic improvements in the treatment of the illness, as well as numerous scientific breakthroughs that have increased our understanding of its causes.

With insight and sensitivity, Dr. Mondimore
- surveys new medications for treating bipolar disorder, including ketamine, exploring the benefits and potential side effects
- reviews the scientific studies that back up claims for recommended botanicals and nutritional supplements, such as omega-3s and NAC, and tells you which ones to leave on the shelf
- expands the chapter on brain stimulation treatments to include new transcranial magnetic stimulation (TMS) devices and techniques such as "deep TMS" and "theta-burst TMS," as well as new details about vagal nerve stimulation
- describes the emerging field of pharmacogenomics: the science of using a patient's genetic profile to improve the selection and dosing of medications
- examines the important relationship between bipolar disorder and borderline personality disorder while discussing why one or the other diagnosis is often overlooked in persons who have both
- lays out recommended lifestyle changes and practical approaches to managing the illness better, planning for emergencies, building a support system, dealing with insurance and legal issues, and defining the role of the family

A section called "What Causes Bipolar Disorder" has been added to this new edition. Dr. Mondimore also discusses the role that talk therapy, including specialized forms of cognitive behavioral therapy and family-focused therapy, can play in managing the disorder. Throughout the book, Dr. Mondimore has added sidebars on fascinating details about the history of this disorder and its treatment.

Francis Mark Mondimore, MD is an associate professor of psychiatry and behavioral sciences at the Johns Hopkins University School of Medicine and the founding director of the Mood Disorders Clinic at the Hopkins Bayview Medical Center. He is the author or coauthor of five books on mental health issues, including Depression: The Mood Disease, Adolescent Depression: A Guide for Parents, and Borderline Personality Disorder: New Reasons for Hope.