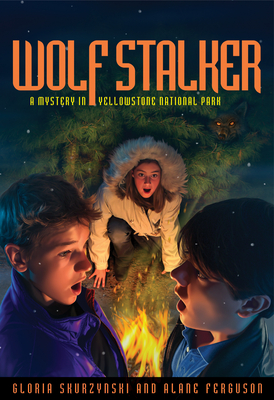 In this fast-paced adventure, the Landons trail a wounded wolf in Yellowstone National Park. The park is abuzz with rumors of a wolf attack. Meanwhile, a killer stalks the woods. Unaware of the danger, Jack and Ashley are more concerned about rebellious teenage foster child, Troy Haverson. From the opening moments at Old Faithful through 48 action-packed hours, the tension builds: What is lodged in the wolf's radio collar? And what is the meaning of the Native American story of Sin-a-Wavi? A heady mix of suspense, adventure, and moments of tenderness lure readers into this story of kids discovering the natural world. The book's afterword, by Yellowstone's Michael K. Phillips, explores the park's Wolf Restoration Program.National Geographic supports K-12 educators with ELA Common Core Resources.Visit www.natgeoed.org/commoncore for more information.

Alane Ferguson is an award-winning writer. Her first mystery, Show Me the Evidence, won the Edgar Award, given by the Mystery Writers of America. She lives in Elizabeth, CO.Award-winning author Gloria Skurzynski has written almost 60 children's books. Her non-fiction book, Almost the Real Thing, won the American Institute of Physics Science Writing Award. She has written several nonfiction books for National Geographic, including Are We Alone, an NSTA Outstanding Science Trade Book for Young People and an IRA/CBC Young Adults' Choice for 2006. She lives in Boise, ID.