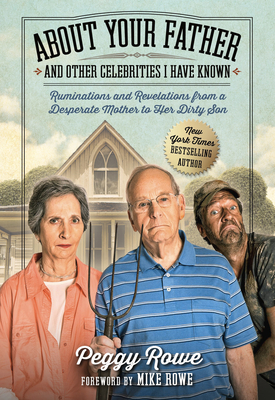 Peggy Rowe used to have a hobby: She wrote articles and stories that appeared in newspapers and magazines. Thanks to her husband, John, three sons, and two parents who lived across the lawn for 40 years, there was no scarcity of material. After writing her first book, About My Mother, at the age of 80--which became a NYT bestseller--and her second book, About Your Father, at the age of 82, Peggy's hobby has become a full-time job. "It took me 80 years to find my voice," she says, "And now I can't shut it up!" In her Facebook blog @TheRealPeggyRowe, Peggy shares her humorous take on daily life and family. She and her husband of 60 years are former schoolteachers and live in Baltimore, Maryland. Mike Rowe is one of three sons born to John and Peggy Rowe, both teachers. He is a television host and narrator known for his work on the Discovery Channel series Dirty Jobs and the CNN series Somebody's Gotta Do It. He hosts a Facebook series called Returning the Favor in which he finds people doing good deeds and does something for them in return. He also hosts the podcast The Way I Heard It with Mike Rowe, which he describes as "short stories designed specifically for the curious mind plagued with a short attention span." Rowe has narrated programs for the Discovery Channel, The Science Channel, and National Geographic Channel such as Deadliest Catch, How the Universe Works, and Shark Week.