City on the Edge: Hard Choices in the American Rust Belt (Excelsior Editions) 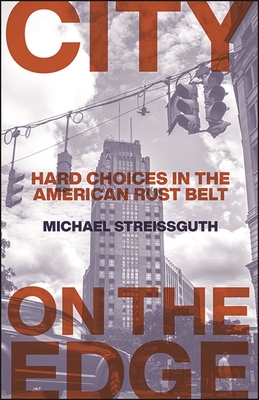 City on the Edge: Hard Choices in the American Rust Belt (Excelsior Editions)

By  Michael Streissguth
$ 24.95
Out of Stock In Store (Click to Order)

Why do people stay in a struggling city? City on the Edge explores this question through the lives of five people in Syracuse, New York, a quintessential rust-belt metropolis. Once a booming industrial center with a dynamic civic life and prominence on the world stage, Syracuse has endured decades of crime, drugs, economic depression, absent-minded political leadership, and population decline. Michael Streissguth spent more than three years interviewing a young survivor of the streets, a refugee from Cuba, an urban farmer, a community activist, and a city elder, who shared their stories as they found ways to make life work against sometimes formidable odds. He also contextualizes their extended commentary and storytelling with secondary characters and various episodes, such as a tragic Father's Day riot and the trial that followed. The result is an eye-opening look at life in America in the twenty-first century, where people strive to turn their ideas, frustrations, and disadvantages into new hope for themselves and the city where they live.

A journalist, filmmaker, and longtime resident of Syracuse, Michael Streissguth is a professor at Le Moyne College. His work has been published in the Washington Post Magazine, Salon, Rolling Stone, the Irish Times, and many other publications. He has written eight books, including Johnny Cash: The Biography.