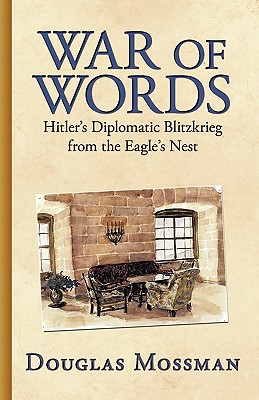 By  Douglas Mossman
Paperback
$ 19.95
Out of Stock In Store (Available to Order)

"To look out in any direction was like looking down from an airplane," is how French Ambassador Francois Poncet described his impression of the Eagle's Nest, Adolf Hitler's solid granite and marble pavilion built at great expense on the Kehlstein mountain peak, at 6,000 ft altitude.

It was in this luxurious appointed pavilion one year before World War II began that Hitler invited an assortment of high placed diplomats to make the impression he was using diplomacy to avert war, but all the while snarling that his empire required more land in the East. As a place, Hitler accepted the Eagle's Nest as a 50th birthday gift from his confidant and Reichs Leader, Martin Bormann.

Former Smithsonian Institution museum exhibitionist and U.S. State Department Diplomacy Center Program Officer, Douglas Mossman invites readers into this hidden getaway to witness secret negotiations between Western diplomats and Der Fuhrer. War of Words: Hitler's Diplomatic Blitzkrieg is a unique work that reveals for the first time many photographs of Hitler meeting with world leaders and diplomats in the Eagle's Nest, and it tells their story how they shook up the geo-political map with cataclysmic results.