Trapped: How the World Rescued 33 Miners from 2,000 Feet Below the Chilean Desert 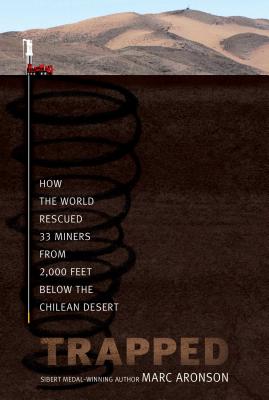 Trapped: How the World Rescued 33 Miners from 2,000 Feet Below the Chilean Desert

By  Marc Aronson
Paperback
$ 7.99
Out of Stock In Store

The amazing story of the trapped Chilean miners and their incredible rescue that Publishers Weekly calls “a riveting, in-depth recounting of the events that held the world rapt.”

In early August 2010, the unthinkable happened when a mine collapsed in Copiapó, Chile, trapping thirty-three miners 2,000 feet below the surface. For sixty-nine days they lived on meager resources with increasingly poor air quality. When they were finally rescued, the world watched with rapt attention and rejoiced in the amazing spirit and determination of the miners. What could have been a terrible tragedy became an amazing story of survival.

In Trapped, Marc Aronson provides the backstory behind the rescue. By tracing the psychological, physical, and environmental factors surrounding the mission, Aronson highlights the amazing technology and helping hands that made it all possible. From the Argentinean soccer players that hoped to raise morale, to NASA volunteering their expertise to come up with a plan, there was no shortage of enterprising spirit when it came to saving lives. Readers will especially appreciate the eight pages of full-color photos, timeline, glossary, notes, and more.

Marc Aronson is the acclaimed author of Trapped: How the World Rescued 33 Miners from 2,000 Feet Below the Chilean Desert, which earned four starred reviews. He is also the author of Rising Water: The Story of the Thai Cave Rescue and Sir Walter Ralegh and the Quest for El Dorado, winner of the ALA’s first Robert F. Sibert Award for nonfiction and the Boston Globe-Horn Book Award. He has won the LMP award for editing and has a PhD in American history from New York University. Marc is a member of the full-time faculty in the graduate program of the Rutgers School of Communication and Information. He lives in Maplewood, New Jersey, with his wife, Marina Budhos, and sons. You can visit him online at MarcAronson.com.