The Scarlet Dragon (The Kingdom of Wrenly #2) 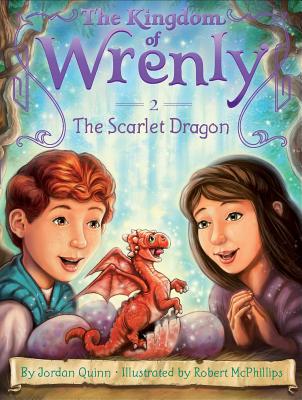 The Scarlet Dragon (The Kingdom of Wrenly #2)

By  Jordan Quinn , Illustrated By  Robert McPhillips
Paperback
$ 5.99
Likely On Our Shelves

In this second Kingdom of Wrenly chapter book, Lucas and Clara search for special berries that will cure the scarlet dragon.

In this second book in The Kingdom of Wrenly series, an unusual egg has been found on Crestwood, the land of dragons. When the egg starts to hatch, the king, queen, and Prince Lucas are there to see what emerges. It’s…a scarlet dragon! Everyone is amazed to see the creature, which they have only heard about in tall tales.

King Caleb declares that the special dragon will belong to an overjoyed Prince Lucas, who vows to keep his dragon safe. But when the scarlet dragon gets sick, the only cure is a potion made with vixberries that grow deep in the forest of Burth (the land of trolls). Lucas and Clara set out to find these special berries, but the task is harder than they expected. Will they be able to find the berries and save the scarlet dragon?

With easy-to-read language and illustrations on almost every page, The Kingdom of Wrenly chapter books are perfect for beginning readers.

Jordan Quinn grew up in a fairy tale castle in England. It had a spiral stone staircase, a moat, and a dungeon. As a child she liked to play hide-and-go-seek and ride her beloved horse, Prince Charming. When she wasn’t riding, she wrote stories about fairies, trolls, dragons, and wizards. Today, Jordan lives on a ranch in California with her husband, son, and a golden retriever named Sir Toots-a-Lot.

Robert McPhillips has been involved in a wide variety of projects over the years—from illustrating greeting cards to animation, though he especially loves illustrating children’s books. Robert makes his home in North Devon, England, with his wife, Sam.