The Last Witch Craze: John Aubrey, the Royal Society and the Witches 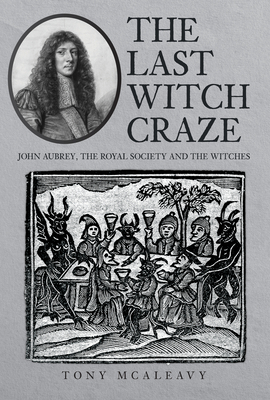 The Last Witch Craze: John Aubrey, the Royal Society and the Witches

The seventeenth-century writer John Aubrey had a dark secret. Publicly, he was a respectable figure and a leading member of the Royal Society, the pioneering body that promoted experimental science. In private, Aubrey was an active wizard who used black magic rituals to summon demons and try to harness their power. Tony McAleavy has uncovered Aubrey’s secret manual of spells, hidden away for centuries in the Bodleian Library in Oxford. This contains many charms intended for use in sex magic. Aubrey’s spells were intended to force women, against their wishes, to have sex.

This important new study shines a light on a sinister and previously unknown aspect of Aubrey’s life and puts it into the wider context of scientific thinking in Restoration Britain. Besides Aubrey, some other members of the Royal Society also believed in the authenticity of witchcraft. They included Robert Boyle, the greatest scientist of his generation. In 1658 Boyle created a sensation when he endorsed a book intended to prove the truth of witchcraft. While the Royal Society had no official policy on the reality of magic, several influential members sought to reconcile belief in witchcraft with the latest findings from scientific research. Joseph Glanvill and Henry More wrote weighty texts explaining that demons and witches were real and could be explained scientifically. They defended the persecution and execution of women for witchcraft. The books of these learned men provided a rationale for the last lethal witch craze in England, Scotland and America. These works were read avidly in Massachusetts by those responsible for the infamous Salem witch trials of 1692.

Aubrey himself was guilty of a terrible double standard; he had no apparent qualms about the judicial killing of poor women for witchcraft while he secretly practiced black magic.

Tony McAleavy has a degree in History from the University of Oxford and was formerly schools history adviser for Gloucestershire Local Education Authority. He has written many school textbooks on different history topics for Cambridge University Press, Harper-Collins and Hodder Education, and has also written extensively for English Heritage. He was for many years the academic editor of the Cambridge University Press school history list and in his current role as research director of an education charity he writes and publishes frequently on the subject of education reform.