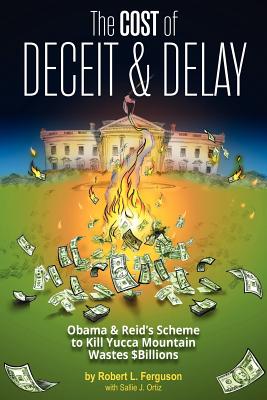 "The Cost of Deceit & Delay" is not about partisan politics. It's about holding our appointed and elected government officials accountable to the law. Bob Ferguson's new book is based on his conviction that "even the President must obey the law." Ferguson reveals President Barack Obama and Senator Harry Reid's underhanded scheme to terminate the Yucca Mountain nuclear waste repository project and calculates the true cost of their actions. The waste of $15 billion already spent to study and develop the Yucca Mountain repository is just the beginning of the costs and future liability these politicians have created for taxpayers and nuclear energy ratepayers. Ferguson, a 50-year veteran in the field of nuclear energy, personally sued the President, the Energy Secretary, the Department of Energy (DOE), the Nuclear Regulatory Commission (NRC), and the NRC's former chairman, and won a determination in court that none of these individuals or agencies had the legal authority to terminate the Yucca Mountain Project or to stop the review of its license application. The court is currently considering whether or not it will order the NRC to restart the review of the application. To block future political administrations from shamelessly using the DOE to carry out its self-serving political agendas, Ferguson, a former DOE official, strongly advocates abolishing the "institutionally politicized" DOE and provides a model for establishing the "real" energy agency that America so urgently needs. As a result of Obama and Reid's policy of deceit and delay, America currently has no nuclear waste program at all; therefore, Ferguson urges Congress to implement the excellent recommendations that the Blue Ribbon Commission for America's Nuclear Future delivered to President Obama in January 2012 to establish a new nuclear waste program.

Bob Ferguson has more than 50 years of experience in the field of nuclear energy, in both government and industry. He is a former Deputy Assistant Secretary for Nuclear Programs in the U.S. Department of Energy, and a former managing director of the Washington Public Power Supply System. He has spent much of his career working to resolve the issues of nuclear waste disposal and commercial spent nuclear fuel management in support of a nuclear energy renaissance.