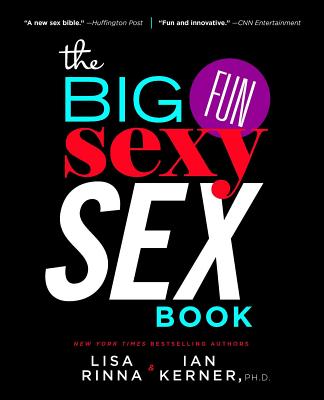 The New York Times bestselling authors of Rinnavation and She Comes First reveal candid and fun tips to improving your marriage by rejuvenating your sex life—and getting from “no-go” to the Big O.

Have flannel pj’s replaced your silky negligees? Are you more likely to nod off cuddling the remote—instead of your partner? Are you too tired for sex? Is foreplay becoming “boreplay”?

IT’S NEVER TOO LATE TO GET THE SEX LIFE YOU’VE ALWAYS WANTED!

• Sexy scenarios and hot new moves to amp up the adventure!

• The best sexual positions to make you climax

• The most amazing sex of your life—at any age, even after kids!

Lisa Rinna played Billie Reed on Days of Our Lives, heated up Melrose Place as Taylor McBride, earned two Emmy nominations for Best Talk Show host for her show Soap Talk on SOAPnet, was featured on Oprah for her boutique, and has made a name for herself as an actress, television personality, and businesswoman. She is also the author of the New York Times bestseller Rinnavation; The Big, Fun, Sexy Sex Book; and the captivating novel Starlit. A gorgeous celebrity with a killer sense of style, Lisa lives in Los Angeles with her husband (actor Harry Hamlin) and her two daughters.

Ian Kerner is a nationally recognized sex therapist and New York Times bestselling author. Ian is a regular contributor to NBC’s Today show and the CBS Early Show, a contributing editor to Cosmopolitan, and CNN’s sex expert. He is also the founder of GoodinBed.com, a web destination for sex/relationship advice that brings together some of the world’s most renowned sex experts. He lives in New York City with his wife and two sons.