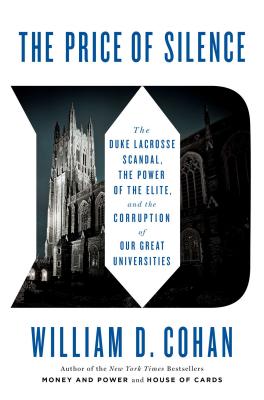 Bestselling author William D. Cohan, whose reporting and writing have been hailed as “gripping” (the New York Times), “authoritative” (the Washington Post), and “seductively engrossing” (Chicago Tribune), presents a stunning new account of the Duke lacrosse team scandal that reveals the pressures faced by America’s elite colleges and universities and pulls back the curtain, in a riveting narrative, on the larger issues of sexual misconduct, underage drinking, and bad-boy behavior—all too prevalent on campuses across the country.

Despite being front-page news nationwide, the true story of the 2006 Duke lacrosse team rape case has never been told in its entirety and is more complex than all the reportage to date would indicate. The Price of Silence is the definitive, magisterial account of what happens when the most combustible forces in American culture— unbridled ambition, intellectual elitism, athletic prowess, aggressive sexual behavior, racial bias, and absolute prosecutorial authority—collide and then explode on a powerful university campus, in the justice system, and in the media.

What transpired at Duke followed upon the university’s unprecedented and determined effort to compete directly with the Ivy League for the best students and with its Division I rivals for supremacy in selected sports—most famously men’s basketball, where Duke has become a perennial powerhouse and the winner of four national championships. As Cohan brilliantly shows, the pursuit of excellence in such diverse realms put extraordinary strains on the campus culture and—warned some longtime Duke observers—warped the university’s academic ethos. Duke became known for its “work hard, play hard” dynamic, and specifically for its wild off-campus parties, where it seemed almost anything could happen—and often did.

Cohan’s reconstruction of the scandal’s events—the night in question, the local police investigation, Duke’s actions, the lacrosse players’ defense tactics, the furious campus politics—is meticulous and complete. Readers who think they know the story are in for more than one surprise, for at the heart of it are individuals whose lives were changed forever. As the scandal developed, different actors fought to control the narrative. At stake were not just the futures of the accused players, the reputation of the woman claiming she was raped, and the career of the local prosecutor, but also the venerable and carefully nurtured name of Duke University itself—the Duke brand, exceedingly valuable when competing for elite students, world-class athletes, talented professors, and the financial support of its nationally prominent, deep-pocketed alumni. The battle for power involved the Duke administration, led by its president, Richard Brodhead, a blazing academic star hired away from Yale; the Duke board of trustees, which included several titans of Wall Street; the faculty, comprising a number of outspoken critics of the lacrosse players; the athletes’ parents, many of whom were well connected in Washington and New York and able—and willing—to hire expensive counsel to defend their sons; and, ultimately, the justice system of North Carolina, which took over the controversial case and rendered its judgment.

The price of resolving the scandal proved extraordinarily high, both in terms of unexpected human suffering and the stratospheric costs of settling legal claims. The Price of Silence is a story unlike any other, yet sheds light on what is really happening on campuses around the country as colleges and universities compete urgently with one another, and confirms William Cohan’s preeminent reputation as one of the most lively and insightful journalists working today.

William D. Cohan is the bestselling author of Money and Power, House of Cards, and The Last Tycoons. He has appeared on The Daily Show, Charlie Rose, CBS This Morning, ABC Evening News, Good Morning America, and more. He has also been featured on numerous NPR programs, including Marketplace, Diane Rehm, Leonard Lopate, and Studio 360 with Kurt Anderson. In addition to being media savvy, Cohan is himself a Duke alum who worked on Wall Street for seventeen years.