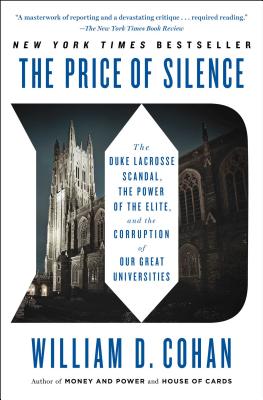 "A masterwork of reporting and a devastating critique...required reading" (The New York Times Book Review): The authoritative, full account of the infamous Duke Lacrosse case, in which academia, sports, sex, race, money, and power all collided to devastating effect.

Despite being front-page news nationwide, the true story of the 2006 Duke lacrosse team rape case is more complex than all the reports to date would indicate. The Price of Silence is the definitive account of what happens when the most combustible forces in American culture--unbridled ambition, intellectual elitism, athletic prowess, aggressive sexual behavior, racial bias, and absolute prosecutorial authority--explode on a powerful university campus, in the justice system, and in the media. In The Price of Silence bestselling author William D. Cohan, whose reporting and writing have been hailed as "gripping" (The New York Times), "authoritative" (The Washington Post), and "seductively engrossing" (Chicago Tribune), presents a stunning account of the Duke lacrosse team scandal and pulls back the curtain on the larger issues of widespread sexual misconduct, underage drinking, and bad-boy behavior. His reconstruction of the scandal's events--the night in question, the local police investigation, Duke's actions, the lacrosse players' defense tactics, the furious campus politics--is meticulous and full. This story is far bigger than what was told by the media, and is still told today; for at the heart of it are individuals whose lives were changed forever. Now with a new afterword, Cohan sheds light on what is happening as colleges and universities compete with one another and "captures brilliantly the theater of the absurd that is played out on campuses every year over one controversy or another" (The Wall Street Journal).