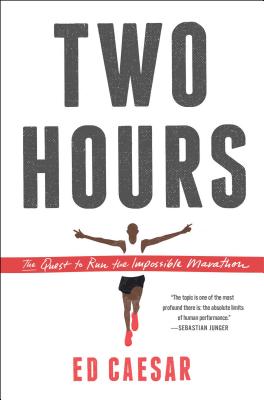 “Compelling…As becomes clear not long after its starting gun, this book transcends the search for a two-hour marathon.” —The Washington Post

Two hours to cover twenty-six miles and 385 yards. It is running’s Everest, a feat once seen as impossible for the human body. But now we can glimpse the mountaintop. The sub-two hour marathon will require an exceptional combination of speed, mental strength, and endurance. The pioneer will have to endure more, live braver, plan better, and be luckier than anyone who has run before. So who will it be?

In this spellbinding book, journalist Ed Caesar takes us into the world of elite marathoners: some of the greatest runners on earth. Through the stories of these rich characters, like Kenyan Geoffrey Mutai, around whom the narrative is built, Caesar traces the history of the marathon as well as the science, physiology, and psychology involved in running so fast for so long. And he shows us why this most democratic of races retains its brutal, enthralling appeal—and why we are drawn to test ourselves to the limit.

Two Hours is a book about a beautiful sport few people understand. It takes us from big-money races in the United States and Europe to remote villages in Kenya. It’s about talent, heroism, and refusing to accept defeat. It is a book about running that is about much more than running. It is a human drama like no other.

Ed Caesar has contributed to The New Yorker, The New York Times Magazine, The Atlantic, Outside, and Smithsonian, among many other publications, and has reported from a wide variety of locations, including Iran, the Democratic Republic of Congo, and Kosovo. He has won nine journalism awards and was named the Foreign Press Association’s Journalist of the Year in 2014. Two Hours is his first book.