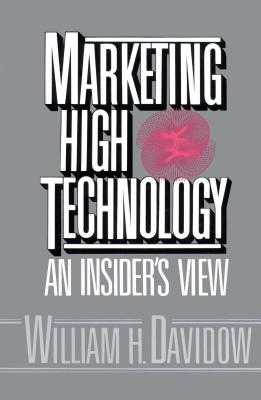 Marketing is civilized warfare. And as high-tech products become increasingly standardized--practically identical, from the customer's point of view--it is marketing that spells life or death for new devices or entire firms. In a book that is as fascinating as it is pragmatic, William H. Davidow, a legend in Silicon Valley, where he was described as the driving force behind the micro processor explosion, tells how to fight the marketing battle in the intensely competitive world of high-tech companies--and win.

Blunt, pithy, and knowledgeable, Davidow draws on his successful marketing experience at Intel Corporation to create a complete program for marketing victory. He drives home the basics, such as how to go head-on against the competition; how to plan products, not devices; how to give products a soul; and how to engineer promotions, market internationally, motivate salespeople, and rally distributors. Above all, he demonstrates the critical importance of servicing and supporting customers. Total customer satisfaction, Davidow makes clear, must be every high-tech marketer's ultimate goal. The only comprehensive marketing strategy book by an insider, Marketing High Technology looks behind the scenes at industry-shaking clashes involving Apple and IBM, Visicorp and Lotus, Texas Instruments and National Semiconductor. He recounts his own involvement in Crush, Intel's innovative marketing offensive against Motorola, to demonstrate, step-by-step, how it became an industry prototype for a winning high-tech campaign. Davidow clearly spells out sixteen principles which increase the effectiveness of marketing programs. From examples as diverse as a Rolling Stones concert and a microprocessor chip, he defines a true product. He analyzes and explains in new ways the strategic importance of distribution as it relates to market sector, pricing, and the pitfalls it entails. He challenges some traditional marketing theory and provides unique and important insights developed from over twenty years in the high-tech field. From an all-encompassing philosophy that great marketing is a crusade requiring total commitment, to a careful study of the cost of attacking a competitor, this book is an essential tool for survival in today's high-risk, fast- changing, and very lucrative high-tech arena.