Eyewitness Knight: Explore the Lives of Medieval Mounted Warriors—from the Battlefield to the Banqu (DK Eyewitness) 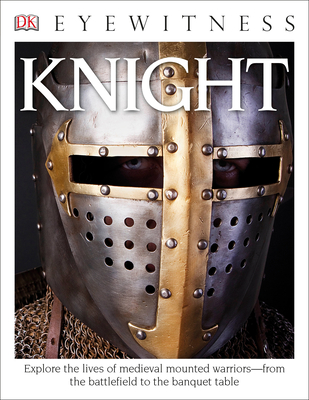 Eyewitness Knight: Explore the Lives of Medieval Mounted Warriors—from the Battlefield to the Banqu (DK Eyewitness)

By  Christopher Gravett
$ 9.99
Out of Stock In Store

Enter the world of chivalrous horseback warriors and learn what it takes to become a knight.

Eyewitness Knight follows the journey of a knight in making, from being a page or a squire at an early age undergoing rigorous training before making it to the ceremony of dubbing. With this book, you can learn what knights wore into battle, from heavy mail to plate armor and gauntlets. You will also enter a gallery of swords and other weapons that were an important part of a knight’s armory.

Ride along with these warriors on their horses that were used not only for wars but also while hunting and jousting. Explore the mighty castles and know how they were protected from the enemy during a siege. Meet manor lord and ladies and learn about the knightly code of conduct and the idea of chivalry.

Great for projects or just for fun, learn everything you need to know about knights with DK Eyewitness.

Christopher Gravett is a recognized expert on weapons, armor, and military affairs in medieval Europe, and works as assistant curator of armor at the Tower Armouries in the UK. He has written several books about warfare in the medieval world, including DK Eyewitness Guides: Knight and The History of Castles: Fortifications Around the World.