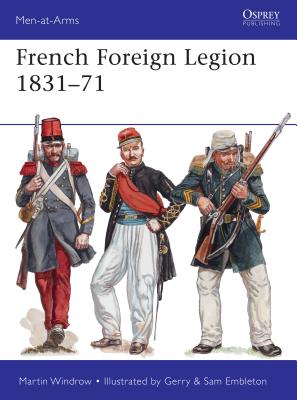 Concluding his bestselling series on the French Foreign Legion, Martin Windrow explores the formation and development of the Legion during its "first generation." Raised in 1831, the Legion's formative years would see it fight continuous and savage campaigns in Algeria, aid the Spanish government in the Carlist War, join the British in the Crimean campaign, and fight alongside the Swiss in the bloody battles of Magenta and Solferino. With the ever-changing combat environments they found themselves in, the Legion had to constantly adapt in order to survive.

Taking advantage of the latest research, this lavishly illustrated study explores the evolution of the uniforms and kit of the French Foreign Legion, from their early campaigns in Algeria through to their iconic Battle of Camerone in Mexico, and their role in the Franco-Prussian war.

Gerry Embleton has been a leading illustrator and researcher of historical costume since the 1970s, and has illustrated and written Osprey titles on a wide range of subjects for more than 20 years. He is an internationally respected authority on 15th and 18th century costumes in particular. He lives in Switzerland, where since 1988 he has also become well known for designing and creating life-size historical figures for museums.