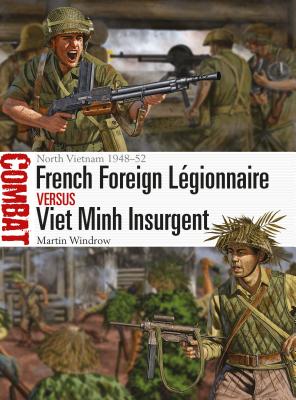 The French Indochina War (1946–54) was the largest of the first generation of post-World War II wars of decolonization as Vietminh insurgents sought to topple their French colonial masters. It was also unique in that the insurgency evolved from low-level guerrilla activity to mobile operations by a large conventional army which finally defeated a large European-led expeditionary force supported by artillery, armor, and air-power. The war's progress was almost entirely dictated by the extreme terrain, and by the Chinese support enjoyed by the Vietnamese insurgents. The actions explored in this study cover three contrasting phases of the war in Tonkin during 1948–52, setting both sides on the path that would lead to the conflict's climactic encounter at Dien Bien Phu in 1954.

Featuring specially commissioned artwork and drawing upon a range of sources, this meticulously researched study casts new light on the troops who fought on both sides in this evolving and momentous conflict.

Johnny Shumate works as a freelance illustrator living in Nashville, Tennessee. He began his career in 1987 after graduating from Austin Peay State University. Most of his work is rendered in Adobe Photoshop using a Cintiq monitor. His greatest influences are Angus McBride, Don Troiani, and Édouard Detaille.